The Falklands seem to be getting a lot of press recently and as someone that has been there three times I thought it might be useful to extol some facts.
Argentina say that they controlled the islands in 1833 and this is correct though they left out the rest of the previous owners – courtesy of Wikipedia.

The British first landed on the Falklands in 1690

Are the Falkland Islands in Argentina’s territorial waters?

Using Google Earth and calculating the nearest points between the two places the result is 250 miles. (Image below)

Territorial waters, or a territorial sea, as defined by the 1982 United Nations Convention on the Law of the Sea,[1] is a belt of coastal waters extending at most 12 nautical miles (22Â km; 14Â mi) from the baseline (usually the mean low-water mark) of a coastal state. 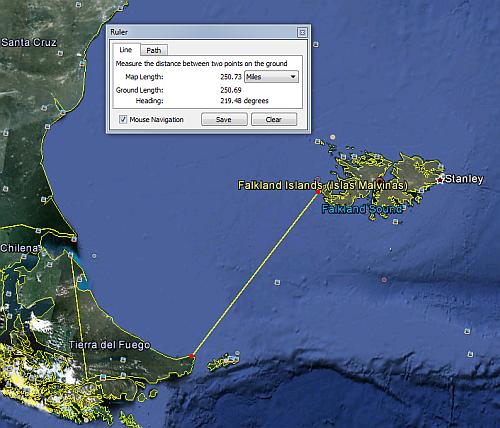 I wonder if it is to do with Oil?

From the Falkland Islands Web site;

The second phase of exploratory drilling offshore the Falkland Islands commenced in February 2010.Â  Diamond Offshore Drilling International’s semi-submersible rig, Ocean Guardian, has been contracted to drill wells in the North Falkland Basin for Desire Petroleum plc and Rockhopper Exploration plc.Â  Additionally, the rig will drill the first exploratory well to the south of the Islands for BHP Billiton Petroleum.

The Falkland Islands Government is encouraged by the significant investment made by the operating companies involved in hydrocarbons exploration, which is at a very early stage.Â  No commercial discoveries of oil or gas have been made yet, but the first wells, drilled in 1998, proved the presence of hydrocarbons in the rich source rock of the North Falkland Basin.

These are all established facts accurate as of today’s date.