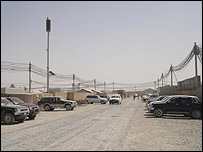 Kandahar Airfield is the military hub for southern Afghanistan

The RAF has been working at full stretch to transport troops out of Afghanistan in time for Christmas, and bring their replacements along with supplies – with presents, letters and messages for troops spending the festive season away from loved ones.

The BBC travelled with the RAF via the vital air link between Britain and the men and women on the ground – from RAF Brize Norton to Helmand Province.

Flt Lt Kent Webb and his crew hold a final early morning briefing before they fly the last British troops out to Afghanistan in time for Christmas.

The logistics of keeping British military operations in Helmand Province supplied with men, mail and machinery are a real challenge: never more so than at this time of year, when the post can’t afford to be late.

"We don’t want to let down the people in theatre, so there’s been a huge effort to make sure that if there’s spare capacity on the aeroplane it’s used for the mail," says Gp Cpt Malcolm Brecht, station commander at RAF Brize Norton.

"We’re very aware that they are all working over Christmas there, and want to celebrate as well."

The pace of operations in Afghanistan and Iraq means that the RAF’s aircrews are busier than ever – flying 35 million kilos of equipment this year alone and up to 19,000 people a month to and from British bases around the world.

As the ageing Tristar transporting the troops and the mailbags into Afghanistan approaches Kandahar airbase, we hear a flight announcement that’s a little different from the usual safety briefing. 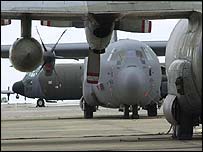 At this time of year, you think more about the people on the ground

Can the war be won?

"Ladies and gentlemen, you are required to don your body armour and your helmet now…" orders the flight officer, and some 200 uniformed men and women put on their camouflage helmets and Osprey body armour to prepare for a potentially hostile landing.

Under cover of darkness, we land safely at Kandahar airbase, now home to Britain’s fighter jets in Afghanistan and many of its transport and attack helicopters.

Travelling over the airbase the next day in a British Lynx helicopter, the sheer scale of the airbase becomes apparent; the message is that Nato is here for the long haul.

By the runway we meet two Apache pilots, Lex and Andy, preparing for duty. Their main role is to fly their Apache alongside the Chinooks that transport the front-line troops to their forward bases.

The heavily-armed Apaches are there to deter any Taleban attack from the ground. They and the other aircrews will all be working this Christmas.

"We have a great team over here, says Andy. "Yes, we’ll miss our families this Christmas – I’ll miss my wife and two children – but we have a job to do. So we’ll do that, and then once we get home again, we’ll think about Christmas and celebrating."

British ground troops’ main complaint is that there simply aren’t enough helicopters, although more Sea Kings are due to arrive in Afghanistan in the spring, while another eight Chinooks are expected by 2009.

The need to re-supply remote bases that can’t be reached by road remains relentless, making this a 24-hour, seven-days-a-week operation.

Late one night, we join a Hercules crew on its mission from Kandahar air base to deliver vital supplies – food, water and building materials – to the newest British forward operating base just outside the town of Musa Qala.

The Hercules’ pilot, Dan, is already on his second mission of the night. The first was a tough one – in high winds and under enemy threat – but his thoughts are with the men below, waiting in the cold and the darkness for the last delivery before Christmas.

"At this time of year, you think more about the people on the ground, away from their families, when you’re delivering the stuff to them," admits Dan. "We can go back to relative comfort, but the men on the ground are down there in potentially nasty conditions – and that’s where they’ll be spending their Christmas."

It’s a textbook drop – almost to the second, they’re over the drop zone, and the supplies are pushed out into the night skies above Helmand province – parachutes flowering open, clearly visible from below – as the plane banks sharply upwards and away from Musa Qala and back to base. Mission accomplished. For today.